After landing in Auckland and being compelled to declare our chocolate at Customs, we caught our Wellington flight without any problems. The actual flight itself was not such easy going… We’d experienced a fair bit of turbulence on the L.A. to Auckland flight, but that turned out to be nothing compared to the approach to Wellington airport. We’ve heard a rumour that Wellington is one of only two airports that requires pilots to have a special licence to land there, and although I can’t find anything on the net to corroborate this, I can easily believe it. The long banking turn through the Cook Straits was full of slides and bounces, and our nerves were only amplified by seeing Wellington’s hills & houses rise above the plane while there was still only sea below it. 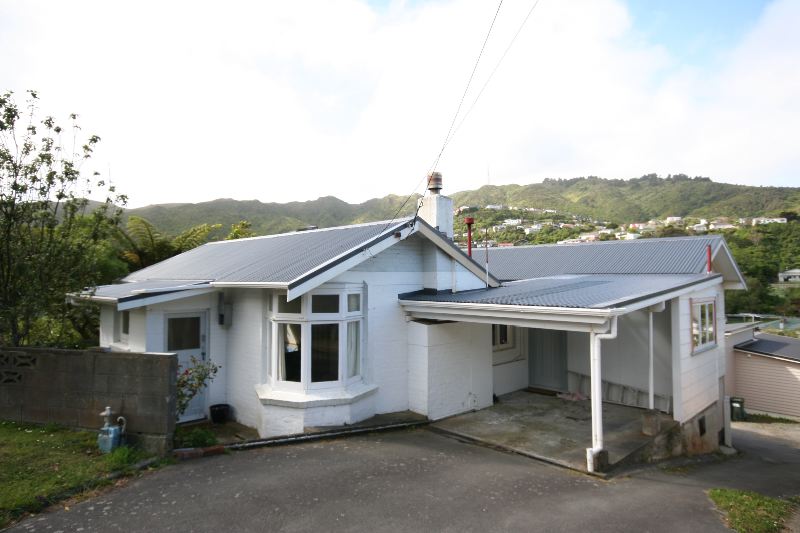 But the landing was good (better that the blind landing into London’s freezing fog), and our friend and my co-worker Mark was there to pick us up at the airport. Mark and his wife Jillian had kindly offered to put us up while we found our feet, and a good cup of tea and a hot shower were most welcome after our long day’s travel.

While our original plan was to try and sort out a place to live during the first week or so, the fact that we arrived over the Christmas/New Year break meant that most people were away on holiday, and finding a flat would have to wait. This gave us ample time to wander about, get to know Wellington, and generally try to settle in. It’s a nice city - I’d forgotten how lumpy it is. People build houses on land that in the UK would be called ‘cliffs’ and left for the birds. 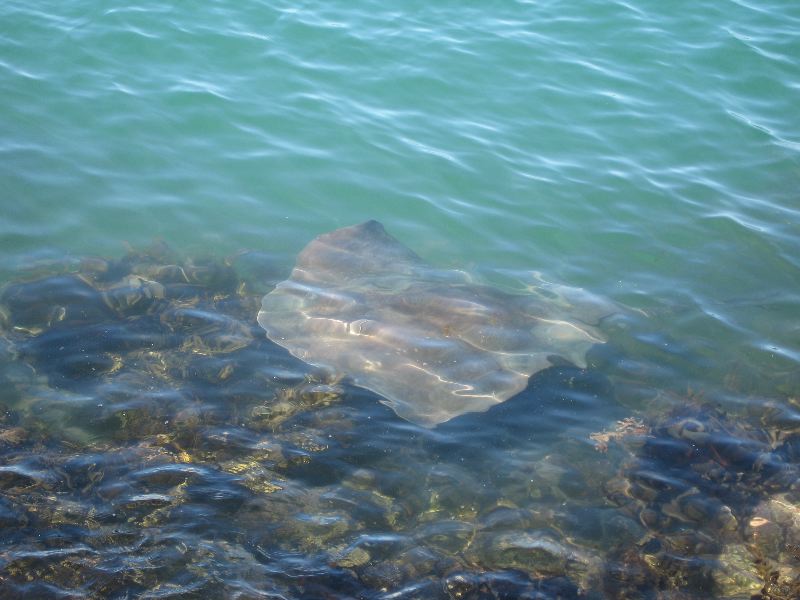 Although we may have arrived during the coldest summer on record, the climate is still somewhat kinder than the Edinburgh winter we left behind, and we’ve been happy to paddle in Oriental Bay while the locals wonder at us from the comfort of their duffle coats.

However, the weather does seem to be improving, and the number of sunny days and the square-inches of sunburn have been steadily increasing. The water in the harbour is the most amazing colour, and full of life, like the stingray Eilidh saw (pictured left). There are some photos from our wanderings in the First few days in Wellington gallery. 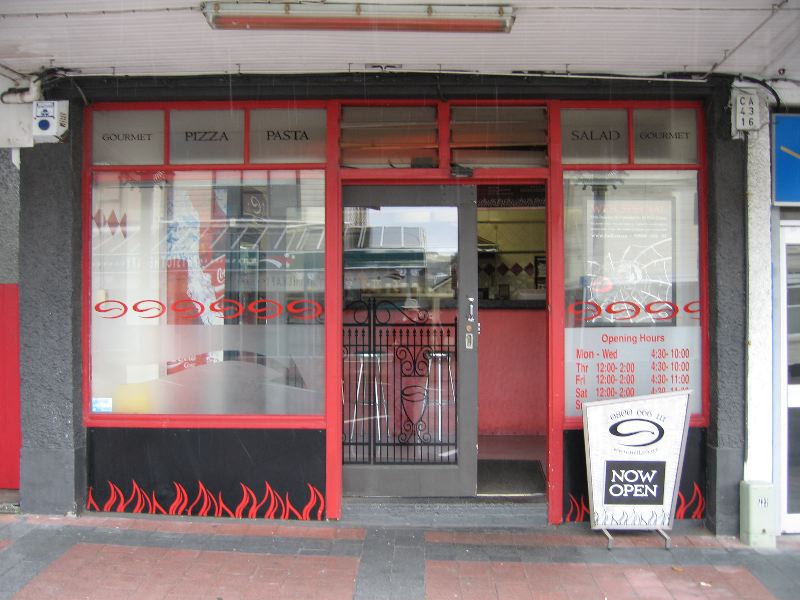 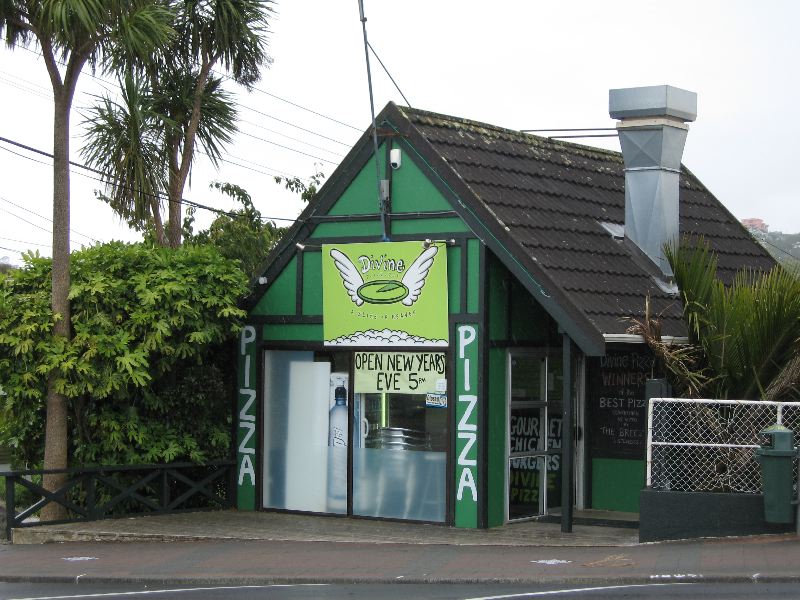 As well as exploring Wellington itself, we’ve enjoyed wandering around Ngaio and nearby Khandallah. We’ve been overly amused by the fast food outlets on Ganges Road, where Heaven and Hell both promise to deliver unmatched gastronomic pleasures.

(Hell Pizza is something of an institution here, and provides such delicious pizza that they probably deserve a blog entry of their own. As does Burger Fuel. As you can see, we have been paragons of healthy living.)

To aid our morning routine, we replaced the Krups Coffee Maker we’ve left behind with a more portable Bialetti Coffee Pot, and have been enjoying good coffee ever since. 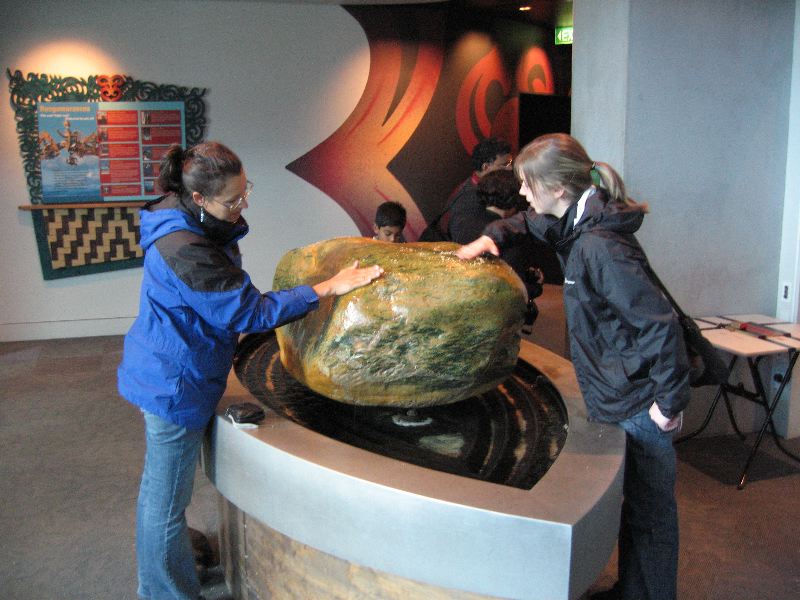 New year itself was fairly quiet, but our friend Jenny was passing through Wellington on her round the world trip, so we had some fun doing touristy things together. The picture shows us rubbing a huge lump of greenstone in the Te Papa Tongarewa museum of New Zealand. Eventually, all the visitors should polish the stone up nicely.

We’re kinda hoping to feel an earthquake or two while we’re here. If you want to keep an eye on our seismological status, you can visit Wellington’s GeoNet Quake Drum.