There haven’t been many updates to the site lately, and that’s because we’ve been very busy. Now it’s time to catch up and to let you all know what we’ve been up to. Read on for the first instalment… Eilidh and I finished work on about the 20th of December, and that week was spent in a bit of a rush, trying to get the flat emptied and cleaned. Thanks to a lot of help from both of our families, we eventually managed it, and with my Dad and my Uncle Pete and Auntie De to see us off, we flew out of Edinburgh on the 22nd.

If you cast your mind back, you might remember the tiny bit of fog that was hanging about at the time. You know, the freezing fog that caused Traffic Chaos In Heathrow. We were supposed to fly through to L.A. on the 22nd, but our Edinburgh flight was delayed by the fog and we missed our connection. We ended up staying with David and Jenny in Ealing, which turned out to be great fun despite the Chaos all around. We even had a chance to nibble on a Square Pie or two.

After missing our connection, the airline had booked us in to fly on Christmas Eve, but this wouldn’t have given us so much time in L.A. So, on the 23rd, we decided to try our luck and head to Heathrow to get ourselves on the “wait list” for that day’s flight. We were there, along with three other people, waiting to see if there might be room for us on the flight once all the booked-in passengers had arrived. Luckily, we all got seats, and were given our boarding passes with 30 minutes until the flight flew.

But, Heathrow is quite big. Thus ensued a mad rush across Terminal 3, with a member of airline staff helping us get into the shortest security queues. It felt like we were in a movie. Of course, running is not really a strong point of mine, but somehow we managed to get to the boarding gate before coronary complications set in. Somewhat amusingly, the flight was slightly delayed, and we ended up jumping the queue and boarding before our seat numbers had even been called.

Ah yes, the seats. Well, the downside of getting on the wait list is that if you do manage to get on the plane, you’ll get the seats that no-one else wanted. We ended up separated by six rows, and both in the middle seat, where you can’t get out into the aisle without disturbing at least one person, and you can’t see the view.

But by then we didn’t really care. The time passed fairly quickly (we both watched Little Miss Sunshine, which was very good indeed), and we made it to L.A. early in the evening of the 23rd. 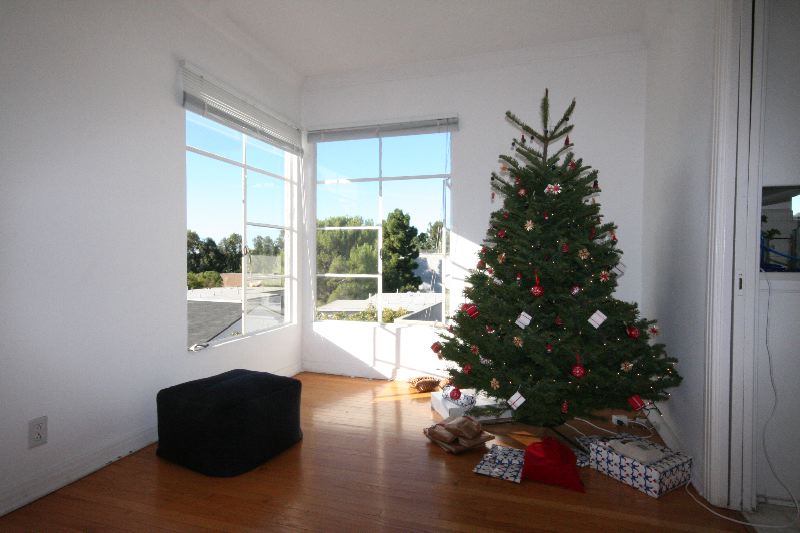 Just after boarding the flight, I only had time to send two texts - one to David to explain that we had left London, and one to Graham to say that we would be arriving in L.A. that day. There wasn’t enough time to check that these messages had actually got through, so we just had to hope that it worked and that we would actually get picked up at the other end.

Thankfully, it all went to plan, and Catherine and Graham were waiting to perform the fastest airport pickup of all time. We headed back to their apartment block, where their vacationing neighbours had kindly agreed to let us stay in the next door apartment, and we could start to relax. Although we did manage to stay up fairly late and fight off the jet lag. 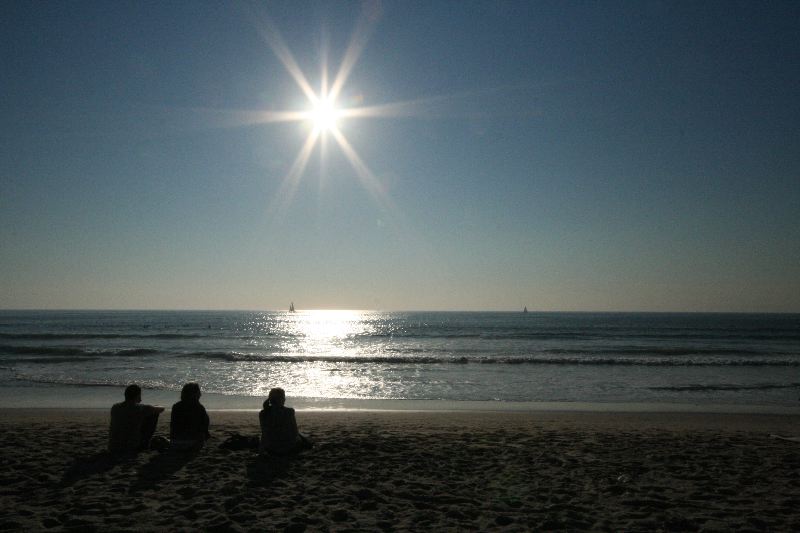 On Christmas Eve, we headed to Urth Caffe to pick up a delicious lunch, which we then ate on Santa Monica beach, looking out over the Pacific while enjoying the clement weather and warm temperatures. For our evening meal, we had fantastic burgers from In ‘n’ Out Burger. Well, when in Rome… 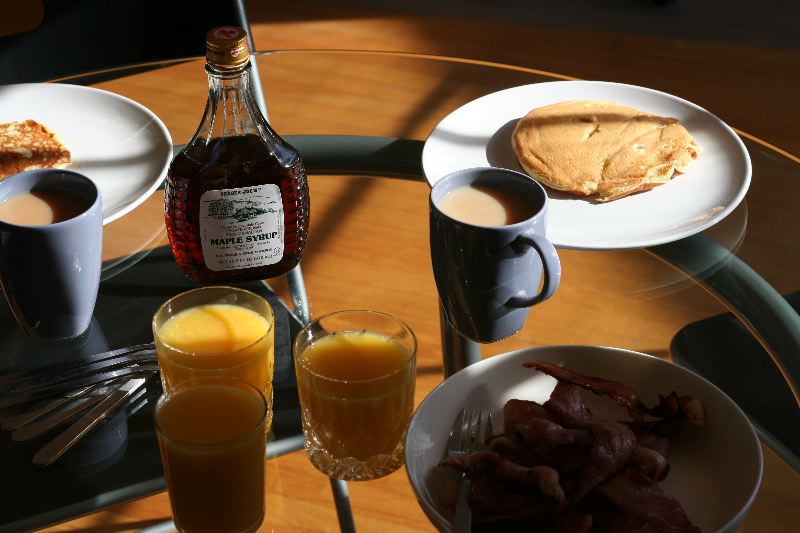 Christmas day is mostly about eating, and it started well with a full-on American style breakfast. Pancakes, Maple syrup and bacon go together remarkably well. Catherine and Graham then did a fine job of preparing Christmas dinner. Turkey with all the trimmings, including Brussel sprouts (at our request - it’s hardly Christmas without them now is it?). Most remarkably of all, C+G managed to get the timing right for everything, and no component of the dinner was under or over cooked. Christmas hat’s off to you both. Another neighbour called Maria joined us for the meal itself, and a jolly time was had by all. It was the hottest of the days we spent there, and all the better for it. 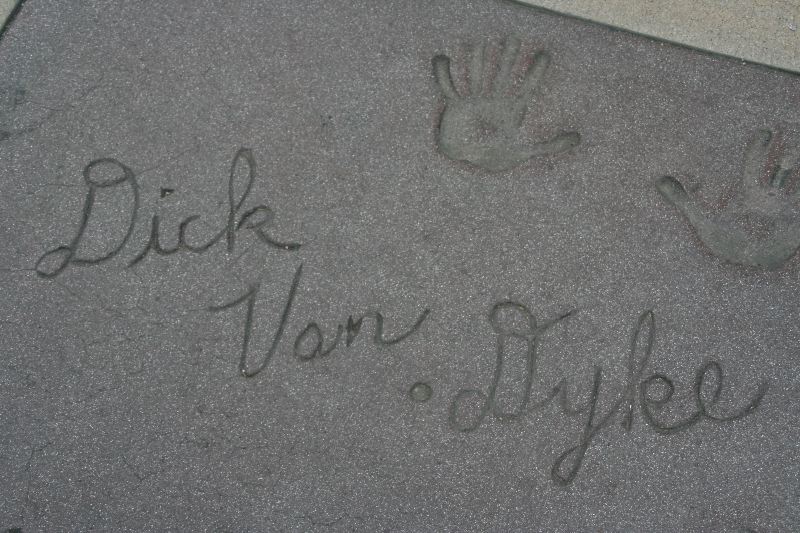 Later in the evening, another Christmas Tradition was honoured - that of watching Mary Poppins. Despite it’s status as a festive staple, I’ve not watched it all the way through since I was a child. I’d quite forgotten how surreal it is. Still more disturbing was the fact that Graham seems to know all the words to all the songs… 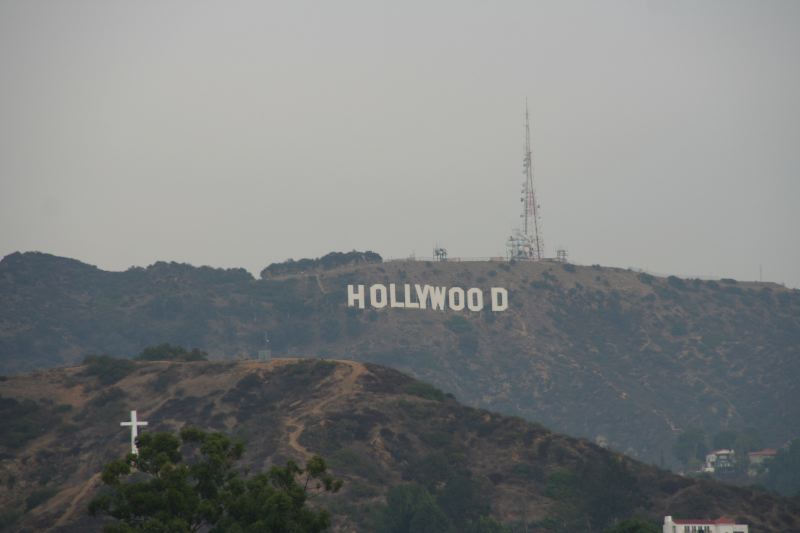 Once we could move again, we decided a little sightseeing around the Land O’ Filth that is Hollywood was in order. We were not disappointed, and there was much gratuitousness in action and sights of the gaudiest nature. The Hollywood sign and Dick Van Dyke’s hand-prints were our favourite bits of glitz.

That evening, it was time to leave again. We packed our things, and headed out to LAX to complete our journey. Despite arriving in good time, we ended up in separate rows again, but a helpful stewardess and a good faff later, we were sitting next to each other by a window seat, looking forward to seeing New Zealand.

For Catherine & Graham’s take on events, check out their weblog entry.

For more photos from L.A., see our Christmas in Los Angeles gallery.