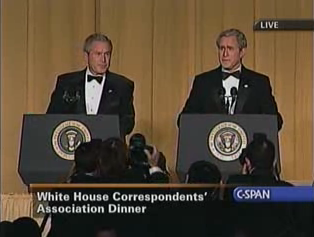 The prime example this year was the two-Bushs routine, where the president gave a speech while a GWB lookalike told us what was on the presidents mind. This was jolly enough, with the president poking fun at himself, e.g. at his inability to say ‘nuclear’. It went down well with the audience there, and made it into the news broadcasts here in the UK. If you’d like to see it, you can find it here on Google Video. 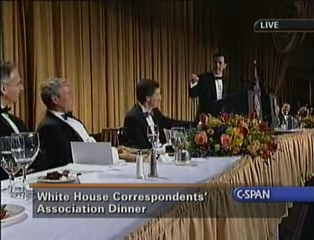 The media were very taken with the visual spectacle of the two Bushes, as you can see from this BBC news story. At the bottom of that article, there’s also a very brief summary of the evenings main act. Something about some guy called Stephen Colbert who gave a mock tribute to Bush, along with a couple of quotes. And not particularly well chosen quotes at that.

That summary really does not do the performance justice. It is the finest piece of political satire I have ever seen from the US. It’s also very, very funny. I don’t really understand why he got so little coverage, althought it may be because the act didn’t go down too well with the audience. I’m not sure about that, because it’s pretty clear that the audience is actually part of the performance, and he’s playing for the folks at home. Not only that, but there is a healthy appetite for satire here in the UK and I would have thought a full broadcast of the speech would have gone down very well.

Maybe it’s simply the fact that it’s 24 minutes long, and difficult to chop down enough to do anything with in a news programme (whereas a picture of two Bushes is easy TV). There’s a lot of talk of self-censorship on the web, and even of a media conspiracy. I doubt this is the case, although stories like this one do worry me.

Anyhow, also thanks to Google Video, you can watch the whole thing online and make up your own mind. I think it’s utterly brilliant. It went down well with some folks in the US too, and they set up thankyoustephencolbert.org, where you should be able to find a video of the speech if my links stop working.

p.s. If political comedy is your thing, you can watch Robert Newman’s History Of Oil via Google Video too. p.p.s. Also, you might like to see how to solve budget problems using biscuits.